Artists have been hard at work, adding to the many reasons people should be visiting the region’s downtown business districts. At the least, murals provide an attractive way to spruce up a building.  Done well, public artwork is educational and often engages a community in its creation.  In Franklin, two of the most recent projects do exactly that. Rotary Way, an alley off of Liberty Street, has long sat as a white canvas.  Recently, the Rotary Club solicited the services of local artist Stephen Leccia to complete a mural. After sharing concepts, Stephen and the Club settled on a montage which included the Venango County Courthouse and images representing the various service projects that the Rotary Club supports. Much of the mural is done, but additional art is likely to be added.  An unveiling and “meet the artist” will be held on October 17th.

Zach Covington, President of the Franklin Rotary and Director of the Barrow Theatre remarks “The trend for public art is to engage people, creating a connection between the art and the community.  It may involve community members actually creating the art or it can be that they interact with the art, as in those who take their picture with the butterfly wings on the side of Buffalo Street Lanes.” Ronnie Beith, Franklin Events Coordinator agrees “Murals are a fantastic addition to our downtown, educational and historic, for residents and visitors.”

The Oil City Main Street Program is building on its downtown murals initiative. Three new original murals will appear in the North Side Business District in the weeks ahead, with a Mural Walk in late October to celebrate their completion. 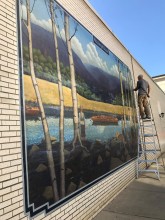 All three of the new murals are original works of art created by professional muralists. Two of the artists have local ties, including Deac Mong of Rocky Grove; and Berry Breene, an Oil City native who now lives in the Pittsburgh area. Bernie Wilke, a Pittsburgh artist who also created a downtown Oil City mural in 2016, is the lead artist in the third project. The location of the new murals includes 50 Seneca Street (Mong), 275 Seneca Street (Breene) and the underpass of Veterans Memorial Bridge (Wilke). The murals, funded by the PA Department of Conservation and Natural Resources and the National Park Service via ORA as the Oil Region National Heritage Area, and the Elizabeth S. Black Charitable Trust via PNC Charitable Trusts and Penn Soil RC&D Council, carry various themes that include elements of oil history & heritage, transportation, wildlife, and music.

Schools are also getting in on the benefits of incorporating art.  Students are now being encouraged to paint ceiling tiles, parking spaces and contribute to other art projects around the Oil City High School.  Principal Scott Stahl suggests that this all contributes to a more positive school climate, one where students share ownership of the facilities.  Studies suggest that this improved climate has a significant impact on academic performance. 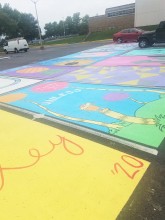 In addition to the new downtown murals, original works of art, the aging oil & gas signs on a mural created by Oil City High School art students in 1998, on the side of Williams Travel, will be updated by Sign Designery of Titusville and Caldwell Signage Solutions of Oil City.

The Oil City Main Street Mural Walk will be held on Saturday, October 27th beginning at 10:00 am. Details are still in the works and will be posted on www.oilcitymainstreet.org and Facebook @oilcitymainstreetprogram and @artsoilcity once finalized.

This article was published in the Venango Area Chamber of Commerce’s October 2018 edition of the VenangoWorks! Newsletter.