Our TED Talk recommendation this month is by Drew Dudley, whom encourages a change in our understanding of leadership. He tells the story of the impact he had on girl in college. Simply by making the girl and those around her laugh on her first day of college, he became an important person in the girl’s life story. Drew says: “to think that maybe the biggest impact I’d ever had on anyone’s life . . . was a moment that I didn’t even remember.”

Though the moment did not seem significant to Drew at the time, it guided the girl’s decision to stay in college and introduced her to the man she would later marry.

“As long as we make leadership something bigger than us, as long as we keep leadership beyond us and make it about changing the world,” said Drew, “we give ourselves an excuse not to expect it every day, from ourselves and from each other.”

Find this TED Talk at https://www.ted.com/talks/drew_dudley_everyday_leadership/transcript

This article was published in the Future Leaders & Entrepreneurs Exchange’s (FLEX) June 2019 edition of the FLEX Your Ideas (FYI) Newsletter.

The FLEX TED Talk recommendation this month is by Mark Bezos, a volunteer firefighter in New York. To “get in on any action” at the scene, he says, you must get to the fire pretty early. He tells the story of his first fire, when he was beat by another volunteer who saved the homeowner’s dog. Meanwhile, Mark had the task of going inside and grabbing the homeowner a pair of shoes.

Although he didn’t receive as much attention for his role in the fire, the department received a letter weeks later from the homeowner that specifically noted “someone had even gotten her a pair of shoes.” Whether an act of generosity or kindness is small or large, they all matter.

“Don’t wait until you make your first million to make a difference in somebody’s life. If you have something to give, give it now,” Mark said. “Not every day is going to offer us a chance to save somebody’s life, but every day offers us an opportunity to affect one.”

Find this TED Talk at bit.ly/FirefighterTEDTalk.

This article were published in the Future Leaders & Entrepreneurs Exchange’s (FLEX) May 2019 edition of the FLEX Your Ideas (FYI) Newsletter.

This months TED talk is from a TEDx event. TEDx is a program that has allowed smaller communities or individuals to host their own self-organized TED events. This allows TED speakers to reach a bigger audience and the event can be tailored to a communities needs.

Debra Searle rowed across the Atlantic Ocean by herself. She started the journey with her then husband but when he had to be rescued due to his severe anxiety, she decided to continue the trek alone. Debra said she had constant thoughts of shark attacks, being run over by large container ships, and never being found by her team back in England. She soon realized the only thing she could actually control was her attitude.

So, each morning she “chose her attitude” for the day and clung to it. It’s a fantastic story about her journey and her decision to take control of her life.

This article was published in the Future Leaders & Entrepreneurs Exchange’s (FLEX) March 2019 edition of the FLEX Your Ideas (FYI) Newsletter. 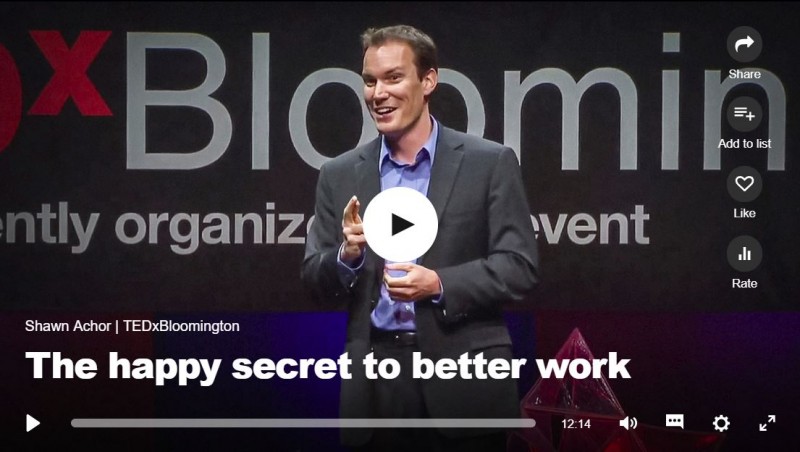 With the holiday and new year celebrations behind us, many of us are looking forward to a fresh start—ready to make resolutions and become better versions of our past selves. According to the Business Insider, 80% of our resolutions will fail by February. FLEX wants to help you stick to your goals and one thing that is sure to motivate you are TED Talks.

TED Talks are influential videos from expert speakers on important topics. We are going to be featuring one TED Talk a month for the first part of the year in hopes they will keep you on track and motivated to achieve whatever your goals for 2019 are.

First up is a talk by Shawn Achor, one of the world’s leading experts on the connection between happiness and success. The talk, titled “The Happy Secret to Better Work,” is a 12 minute discourse arguing that happiness inspires us to be more productive. He conveys that happiness isn’t the destination, but is actually a driving force behind success. It’s fast-paced and funny and will leave you feeling energized.

This article was published in the Future Leaders & Entrepreneurs Exchange’s (FLEX) January 2019 edition of the FLEX Your Ideas (FYI) Newsletter.