Heather Hondel and Jessica Wilson, our interns at the Venango Chamber, were recently back for winter break! Heather has worked for us for two summers and Jessica joined our team last summer.

They are excited to reflect on how their experiences at the Chamber affected their studies and what they have learned over the last semester that now applies to their work at the Chamber.

Working at the Chamber has greatly influenced my college experience. I have utilized marketing skills I gained at the Chamber in my classes, such as when I served as the Chief Marketing Officer in my e-Commerce class and as the Publicity Officer for Grove City College’s Swing Dance Club.

Working with Chamber Staff has given me the ability to work as a team on projects in my classes, as many of my entrepreneurial classes involve heavy amounts of teamwork and planning.

This semester, I took a class entitled Managing a Growing Enterprise. I was placed in a team that fulfilled various roles in a company that we managed for six simulated quarters. It showed me how to be quick on my feet and change strategy in an instant when outcomes were different than initially anticipated. This has helped me generate problem solving skills that I can take into the workplace.

This class also opened my eyes to how connected all the roles in a company are and how to work together to accomplish goals. I now realize the importance of understanding the big picture with the overarching vision of a company, while working to generate a thorough understanding in my own role and how that contributes to the vision.

Throughout the course, my management team presented weekly executive briefings containing strategy updates. This class will be incredibly influential on how I work as an intern at the Chamber and in life in general.

Heather is a junior at Grove City College studying Entrepreneurship.

After a few weeks working at the Chamber this summer, I knew this experience was going to change the way I work and what I want my life to look like. During my time at the Chamber, my view of small and local businesses drastically shifted.

Previously, I did not think about local business or how and why they are important, but after my experiences, I realize what a vital part these businesses are for a community. This has greatly impacted my life at school; I now see the local community as a place I want to be.

I am also more intentional about supporting and work in the community. This appreciation for local business has informed several projects and the courses I am taking at school.

One of the classes I took last semester focused on the task patterns and best practices in designs, and it enabled me to think more critically about how and why things are set up the way they are. It also empowered me to think objectively rather than subjectively about important business decisions.

As I come back to work at the Chamber over break, thinking about best practices and objective critique are at the forefront of my mind. I see these ideals shaping the way I work on personal and group projects. Understanding the why behind design and content choices is an integral part of good work and I am so pleased to be able to practice what I have learned in class at the Chamber.

Jessica is studying Communication with concentrations in PR and Integrated Media at Geneva College and plans to graduate in the spring.

This article was published in the Venango Chamber’s January 2020 VenangoWorks! Newsletter.

Heather Hondel returned to the Chamber’s staff in May as our summer intern, and Jessica Wilson joined our staff on June 17 as our new Be Here Summer Intern.

Heather is an entrepreneurship major at Grove City College and will assist with the Oil Heritage Festival Basket Raffle, newsletter, and other office needs.

Jessica is a communication major at Geneva College and will assist with the Be Here Initiative, including event planning and marketing.

We’re excited to have these two join our team! Stop by the Chamber to say hello and join us in welcoming them.

This article was published in the Venango Area Chamber of Commerce’s June 2019 VenangoWorks! Newsletter.

You may have already met Heather Hondel, as she is the summer intern at the Venango Area Chamber of Commerce. Besides her internship, where she does event planning, marketing, writing, and more, she is a server at Timber Lake Lodge in Titusville.

Heather is a Venango County native and a 2017 graduate of Cranberry High School. She is now studying entrepreneurship at Grove City College, where she has begun the process of starting a business called “dancetracks,” an app to help dancers rehearse outside of the studio (learn more about her business at dancetracksapp.com).

At college, Heather also works part-time as a “Crimson Caller,” where she contacts Grove City alumni. Some of the accomplishments she’s most proud of include graduating from Cranberry as Valedictorian, making Dean’s List with High Distinction, and placing in business competitions at college, in which she finished 4th place in an elevator pitch competition and her team  was named a finalist in the Wolverine Venture Battle.

Dance, theatre, and music are huge passions of Heather’s. She has taken dance lessons from Thomas School of Dance for 15 years and student taught there throughout her high school years. At Grove City, she joined the Orchesis Dance Troupe and the Spring Dance Company, and also plays flute in the marching band. Additionally, she has been choreographing for Cranberry High School’s musicals for four years.

Some other things Heather loves include Jesus, sparkles, the color pink, rabbits, scrapbooking, and Disney. She spends a lot of time in Venango County watching and participating in musicals at the Barrow-Civic Theatre and enjoys going to the Hunter’s Trail Shoots at the Oil City Izaak Walton League.

In the future, Heather hopes to be the owner of a performing arts startup and to further dancetracks’ progress with her team. She also hopes to continue gaining entrepreneurship knowledge and choreography experience. 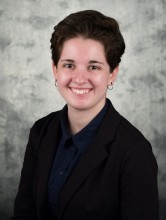 Sydney Herdle is a second-year intern at The Derrick and The News-Herald, where she spends her time as a photographer, reporter, and paginator.

She is a 2016 Franklin High School graduate and will be a junior at Penn State University this coming fall, where she is studying photojournalism. So far in her college career, one of her biggest achievements is being one of few Penn State students to attend the Keystone Multimedia Conference in Gettysburg.

Sydney was born in Pittsburgh and lived in Cranberry Township, until moving to Franklin in 2008, where she has since remained. She enjoys being outdoors and participating in activities such as fishing, biking, kayaking, and archery. Sydney is also a musician and will be playing in the percussion section of the Franklin Silver Cornet Band for her seventh year.

Before college graduation, Sydney would like to get an internship at a paper such as the Pittsburgh Post-Gazette or Buffalo News. At some point, she would like to open her own photography business on the side, and she believes that doing that in Venango County with the connections she already has would be great.

Locally, Sydney enjoys Leonardo’s and Amazing Foods in Franklin. Additionally, she frequents the bike trail, Allegheny River, and Two Mile Run County Park, along with attending shows at the Barrow-Civic Theatre and concerts in Bandstand Park. The things that she enjoys the most about working in Venango County are meeting new people and visiting new places and events. She is constantly learning more about the area through her job, which she has found to be a really cool experience.

This article was published in the Venango Area Chamber of Commerce’s July 2018 edition of the VenangoWorks! Newsletter.