All posts in Chamber Blog 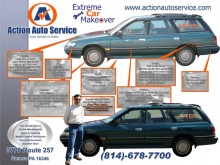 I continue to be impressed at the ways Chamber members serve our community. Yesterday I joined other community members at the Cranberry Mall for the second annual Community Car Care Aware hosted by Action Auto Service, Inc. The event included both indoor and outdoor activities.

This year Action Auto unveiled their first Extreme Car Makeover project at the event.  A deserving family was selected by a community panel, that included Trenton Moulin of the Allegheny Chapter of the American Red Cross, Dr. Robert DeShong of Tomorrow’s Dentistry Today, and Linda Lusher of Galaxy Federal Credit Union, to have their vehicle fixed at no cost to them.  This year’s recipient was Jen Girty and family.  Girty, a widowed mother of four young daughters, was very appreciative of the work Action Auto did on her 1992 Subaru station wagon.

“Our car was unreliable, and we never knew when or if it would start.  Because of this we had a lot of trouble getting the kids to their appointments.”

Girty’s oldest daughter, Alexis who is 10 years old, wrote in her submission letter that “there were times when our car was broke down for more than a year and the last two years we’ve had it – it has only worked half the time.” The list of items that needed repaired was extensive. The entire vehicle, except the roof, was repainted.

Bill Kapp, owner of Action Auto says, “This was a lot of work to complete in a short amount of time.  My team really worked hard to pull this off in time for the unveiling.”

Kapp says this year’s event was a success and looks forward to next year.

Action Auto Service Inc. was recognized as the 2008 Business of the Year by the Venango Area Chamber of Commerce. Owner Bill Kapp began his first term on the Chamber’s board of Directors in January of 2009.

If you were seeking a free, inexpensive means to connect and converse with both potential and return customers, Twitter is for your business.

Twitter is a micro-blogging platform a bit like a cross between blogging and instant messenging. You have 140 characters or less to tell your group of “followers” (twit-speak for “friends”) what you’re doing.

Your followers can be your friends, your co-workers, your clients, your customers, or anyone else who thinks you’re worth following. You have complete control over whom you chose to be friends with and who you allow to follow you.

But How Can It Help Me With My Business?

Think of social networking as your sales and marketing time. The more you put into it, the more you’ll get out of it. Twitter allows you to directly connect to your clients and customers. It’s all about having conversations with clients, not at clients.

Not sure how to get started?  Join us at the Chamber this Wednesday, April 15 at noon for our next Brown Bag Lunch to take a look.  We’ll help anyone interested in setting up a twitter account (FREE).

Already using twitter?  We’ll look at tips and tool to help you manage your tweets and make the most of your twittering time.

If you have a laptop, feel free to bring it along, but it’s not necessary.

If you’re following our twitter feed you’ll recognize this quote that I tweeted yesterday: “A prime function of a leader is to keep hope alive” ~John W Gardner

Isn’t it funny how bits of wisdom find there way to us just when we need them, well at least sometimes.  The week is barely underway and I have witnessed several (the word many might be more appropriate) leaders in our community who are keeping hope alive. My Facebook friends know that I began yesterday at the Child Development Centers, Inc talking with Rina Nerlich, a leader planting seeds of hope for our future.  My evening ended with The local Lions Club, men who have truly  spent a lifetime promoting hope and continuing to do so , many in their retirement years.

This morning, leaders from across the region met to discuss how our communities can work better together for the arts. Next it was on to meeting with new business leaders committed to creating a new vision for Oil City.  Afternoon provided me the opportunity to visit with Lance Hummer, Keystone Community Education Council, who works to create educational programs critical to providing businesses and employees much needed training.  Hope for the future of business!

My last stop of the day was yet another room full of business and community leaders, members of ICAP, Industry Community Advisory Panel, committed to doing business to the highest safety standards and providing accountablility through reports to community members.

Our community is full of leaders who keep hope alive for me, everyday!

We’re definitely exploring a new frontier here (well new for the chamber) but after much consideration and input from several members and chamber professionals I am confident we need to establish our Facebook presence.

At first glance it may appear that this all just fun and games, but as any business who is successful can attest, building relationships is critical.  Facebook and other social media site provide a great tool for getting to know your customers, your vendors and maybe your employees?

With over 175 million people using Facebook and close to 480,000 new users every day, you have an opportunity to reach this audience and it’s FREE!  We’ve joined in the conversation many ties over about how we need to reach a younger audience.  Here you have it, the perfect vehicle.

Each day seems to usher in more bad news about the economy. It seems as if no business is left untouched. As we struggle to make our way we look to our leaders for direction. Today I had the good fortune to visit with a number of community leaders, as I do most days. Under intense scrutiny these members of our community, who today included Mayor Sonja Hawkins and the new president of UPMC Northwest, David Gibbons, are committed to leading their organizations and our community into the future with optimism. Clearly we identify them in their roles, but have you considered your role as a leader?

Regardless of whether it’s a team of many, a small business or only a few friends and family, chances are someone’s depending on you. Now is a great time to reevaluate how your treating those you lead. Are you considering what others are up against as you set out each day. Will you set a good example or join the ranks of those who would prefer to play the blame game, finding fault with our recognized leaders. If you’re up to it, take a look at what’s really important and find way to lift people up. Need a little help…http://tiny.cc/Vg9UB